On April 3, 2008, a solemn and dignified first-publishing ceremony of a fact-recording book entitled H.H. Dorje Chang Buddha III, which published jointly by the World Buddhism Publishing LLC and the World Dharma Voice, Inc., was held at the Library of the Congress of the United States. The book was also formally accepted into the collection of the Library of the Congress of the United States. Only since that time, did people in the world know that Master Wan Ko Yee, who had been broadly respected by the great masses and who had also been known as Great Dharma King Yangwo Yeshe Norbu, had been recognized by the world’s leaders, regent dharma kings, and great rinpoches of Buddhism through official documents as the third incarnation of Dorje Chang Buddha, who is the primordial Sambhogakaya Buddha of the universe. The Buddha’s name is H.H. Dorje Chang Buddha III. Since then, people began to address His Holiness the Buddha by “Namo Dorje Chang Buddha III.” This is similar to the situation that Sakyamuni Buddha’s name was Prince Siddhartha Gotama before attaining Buddhahood. However, after Sakyamuni Buddha had attained Buddhahood, His title changed to “Namo Sakyamuni Buddha.” That is why we now address His Holiness the Buddha as “H.H. Dorje Chang Buddha III.”

Master Wan Ko Yee’s Painting Was Sold at the Price of 300,000 US Dollars per Square Foot

The Painting at the Price of 900,000 US Dollars Was Not Sold

AN auction held by International Buddhism Sangha Association took place on February 7, 2007 in San Francisco. Three Chinese paintings were displayed. One of the paintings entitled “Two Flowers; One Lotus Capsule; One Dharma Nature” was sold at 300,000 US dollars per square foot.

The world renowned Great Buddhist Dharma King Wan Ko Yeshe Norbu (also known as the great artist Master Wan Ko Yee) donated three valuable paintings as gifts to International Buddhism Sangha Association. At the time of the auction of these three paintings more than 10 people expressed an interest in buying them. After several competitive bidding rounds, the lotus painting was sold to an English collector Ian Hamilton at the price of US$300,000 per square foot. Another painting, “Plum Blossoms”, was sold at US$210,000 per square foot. However, the most anticipated painting, “Pasture in Spring (a shepherd boy herding cattle)”, was not sold at this time. “ Pasture in Spring ” was considered the most valuable of the three donated paintings. Even though the buyer raised the price to US$540,000 per square foot, the seller insisted that the price cannot be below US$900,000 per square foot. Therefore, this transaction was not completed because of the great difference between the prices.

For the sake of advocating Buddha-dharma and promoting sacred Buddhist affairs, the International Buddhism Sangha Association has decided to make three valuable paintings donated to the Association available for purchase. A sales event will be held on Wednesday, February 7, 2007 at 2:00 p.m. at Hua Zang Si in San Francisco. All proceeds received will be used for the benefits of living beings.

There will be an on-site notary public providing related notary services for the proof of each purchase. 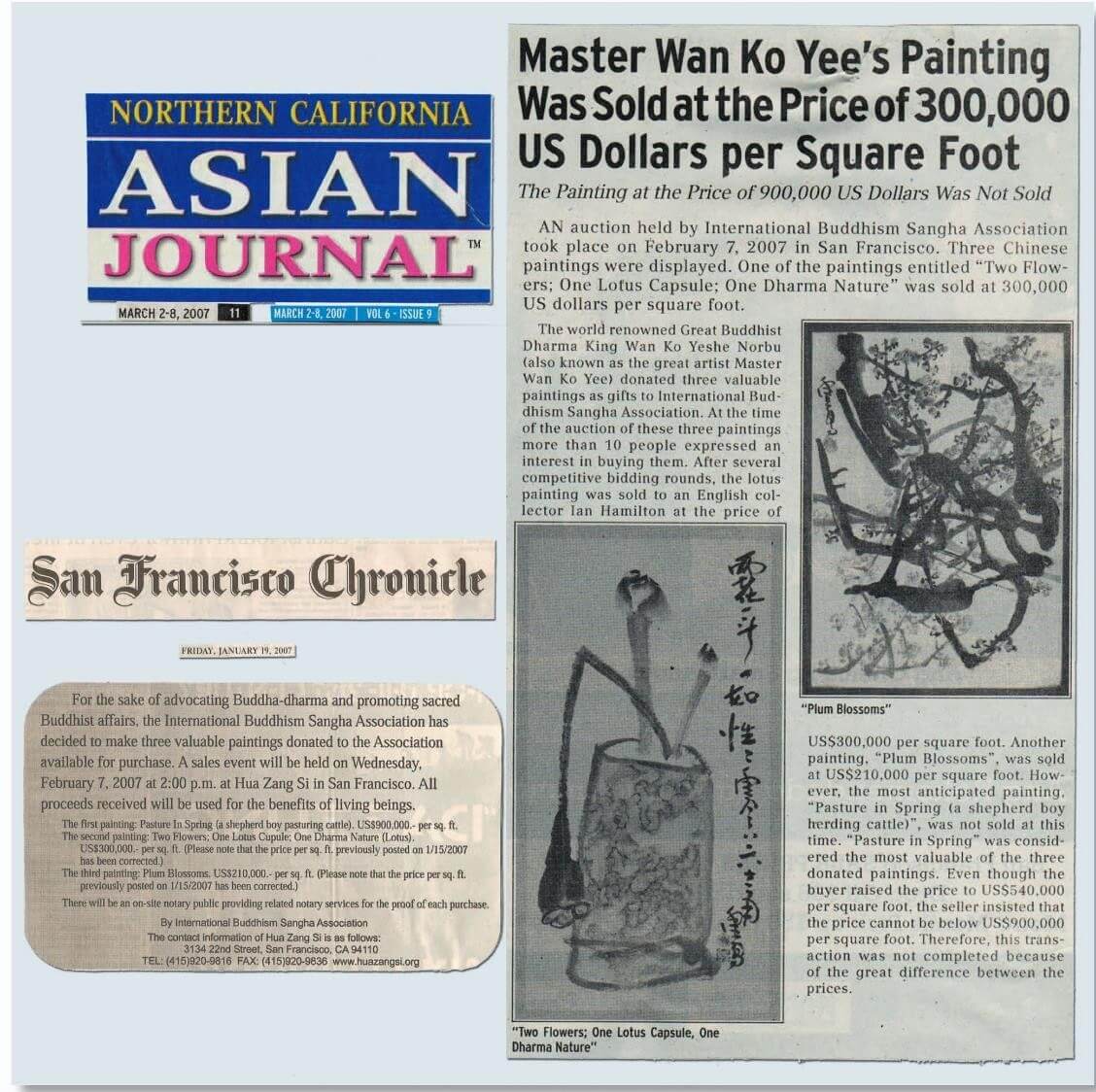 The contact information of Hua Zang Si is as follows: