On April 3, 2008, a solemn and dignified first-publishing ceremony of a fact-recording book entitled H.H. Dorje Chang Buddha III, which published jointly by the World Buddhism Publishing LLC and the World Dharma Voice, Inc., was held at the Library of the Congress of the United States. The book was also formally accepted into the collection of the Library of the Congress of the United States. Only since that time, did people in the world know that Master Wan Ko Yee, who had been broadly respected by the great masses and who had also been known as Great Dharma King Yangwo Yeshe Norbu, had been recognized by the world’s leaders, regent dharma kings, and great rinpoches of Buddhism through official documents as the third incarnation of Dorje Chang Buddha, who is the primordial Sambhogakaya Buddha of the universe. The Buddha’s name is H.H. Dorje Chang Buddha III. Since then, people began to address His Holiness the Buddha by “Namo Dorje Chang Buddha III.” This is similar to the situation that Sakyamuni Buddha’s name was Prince Siddhartha Gotama before attaining Buddhahood. However, after Sakyamuni Buddha had attained Buddhahood, His title changed to “Namo Sakyamuni Buddha.” That is why we now address His Holiness the Buddha as “H.H. Dorje Chang Buddha III.”

A RECORD IN PAINTINGS

It has been noted by people that Master Wan Ko Yee, the world famous master of Buddhism and art, set the world record in Chinese art history of the highest selling price of paintings by a painter who is still alive. His painting, “Venerable Da Li Won”, again broke his own world recordwhen it was sold at NT$72,000,000.00 (US$2,207,912.00) by Mr. Naylor, an art collector and art merchant from England. Once the selling price was confirmed at the auction, people on the spot clapped their hands continuously for quite a white. The year of 2000, the beginning of a new country, people were more impressed by the special honors which Master Wan Ko Yee received. On March 8th this year both government of State of California and government of City of San Francisco separately proclaimed March 8th, 2000 as Master Wan Ko Yee Day based on his amazing achievements in various fields. In addition, he received honoray doctorate degree and professorship from ninety-two universities in the United States and other countries all over the world. It was the first and highest honor in history among Chinese worldwide. On May 12th the same year in Taipei, at the meeting organized by United International World Buddhism Association Headquarters, 2137 eminent monks and nuns and the great virtuous ones from 416 Buddhist organizations, associations, and temples worldwide unanimouslyconferred Master Wan Kao Yee as the true Buddhist Master with perfect mastery in both Esoteric and Exoteric Buddhism. Talking about art, it is just a small drop of water in the boundless ocean of Buddha Dharma of Master Yee. Since he is a great Dharma King Master with perfect mastery in Esoteric and Exoteric Buddhism and Five Brightness, the Art which is one of the Five Brightness, has madeMaster Wan Ko Yee reach the unprecedented height in arts including paintings and calligraphy. On May 28th this year Unique Art Collections International Co., Ltd. auctioned one of Master Yee’s paintings, “Majesty”, at an unprecedented sky-high price of US$455.00 per square inch. It shocked the art circles worldwide. On November 26th Unique Art Collections International Co., Ltd. again shocked the world by auctioning the painting, “Venerable Da Li Won”, at US$467.00 per square inch. In proved that the skills, styles, and varieties of Master Yee were comprehensive and lofty. Master Yee can use dozens of different skills in painting scenery, figures, animals, flowers, birds, fish, insects, and etc. Master Yee is an expert in all styles no matter it is detailed brushwork style, freehand brushwork style, or splashing ink style. All of these new styles were created out of his genuine efforts in traditional fields. Master Yee is the most famous scholar in modern history with his abundant knowledge, distinguished achievement, and many publications. Although his reputation has already spread all over the world, it is hard to find someone like him with such humbleness, sincerity and noble virtue. It has won the recognition of experts in academic organizations worldwide. 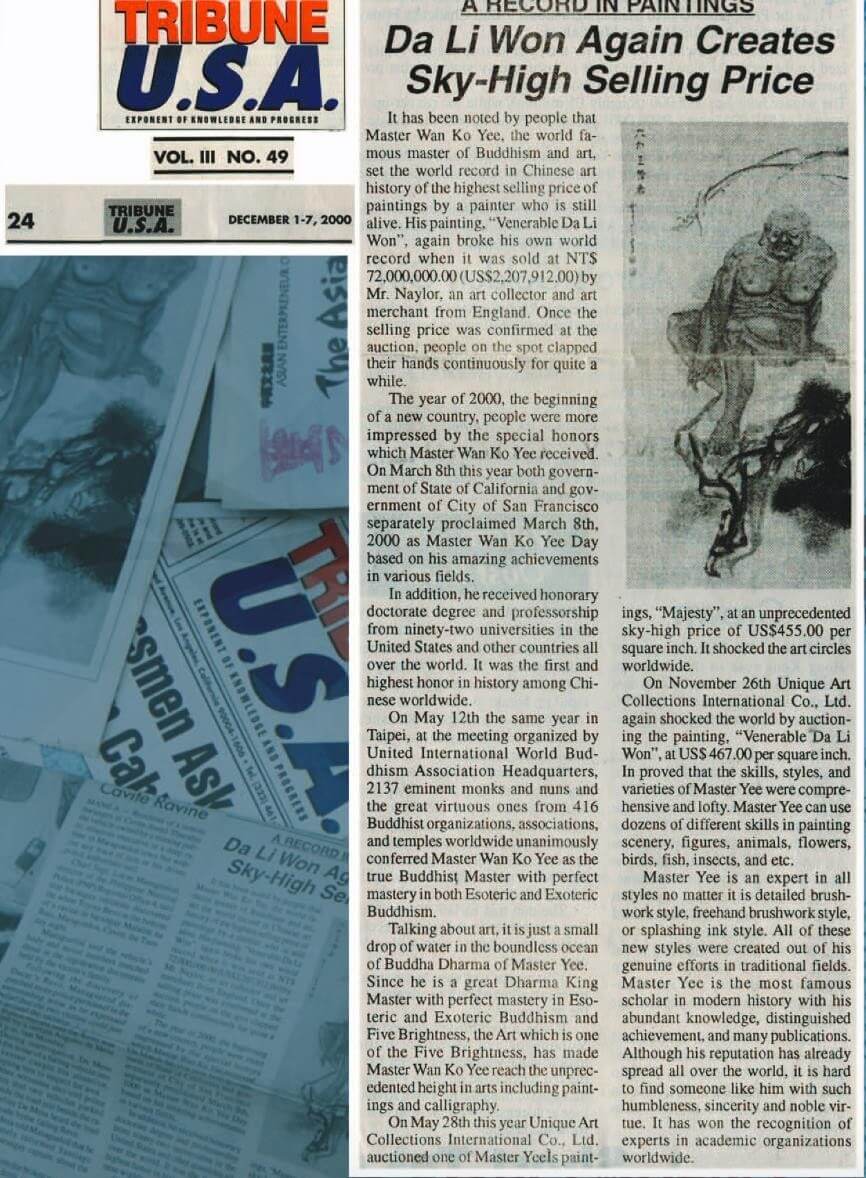