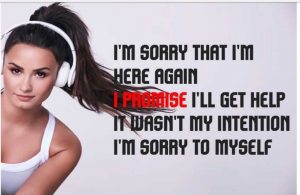 Demi Lovato, an American singer-songwriter, constantly struggled with mental illness in her life and what makes her story remarkable is how honest she is in her journey. In the middle of this year, she released the song “Sober”. While some people see the song as a possible cry for help from her drug addiction, additionally, I see it as a summary and revelation of the inner turmoil she faced during the months before her overdose.

Personally, I recently went through a low point myself this year where this song was able to help me find solace in myself and provided me with an insight on human behaviour and emotions. However, I do not want to get into the details of my situation as I do not want to undermine the struggles of those who have faced addiction and/or mental illness. In fact, I do want to highlight the relatability of the said song and explicate how our response to distress might be a repetitive cycle in a literature approach for people to understand and learn from.

With each chorus she sings, it is very evident that the singer has fallen into an emotional trap as articulated in the repetitions of words that follow the rhythmic melody of the song. The words “every time”, “I don’t know why”, and “I try” are chosen to highlight the infinite feelings of confusion and the efforts in vain that Demi had to go through. While it is a common technique for music pieces these days, the fact that Demi chose to retain the lyrics for both choruses, as opposed to changing them for a more hopeful or uplifting tone, might be used to reflect that idea of how her life is spiralling out of control, where despite her acknowledgement of guilt or remorse in the second verse, she is still back to her trapped state, struggling to escape. The mention of her parents in the song could also have the same interpretations because they were reportedly known to have suffered from drug issues as well, leading the audience to see that this issue is not just physically limited to Demi, but might have been biologically passed down, as if the pain will continue as they progress through their lives.

What makes the song hit home for many of us is the fact of how painfully aware that she has brought herself to this situation, suggesting that it was a string of bad choices that caused her this dilemma. Already from the start, she disappointingly reveals that “[she] got no excuses”, a powerful absolute statement that makes sure that the blame of her drug overdose cannot be deflected away from herself. This sentiment is reinforced with the use of “sorry” and asking for “forgiveness” from the various parties within he life. Her sorrow state coupled with the act of requesting for forgiveness emphasises her vulnerability because it is as if she is solely asking for human empathy in order to elevate herself and regain her identity. The idea of a second identity was played around at the start as well when she was asked to be waked when “[her]self has reappeared”. In this way, she is trying to distant herself in order to try to avoid her problems but the futility of this gesture is juxtaposed with the heavy usage of the singular pronoun “I” at almost every line thereafter, ultimately showing that there is no separation and that she would have to face the consequences of the choices she has made. Perhaps her last utterance stresses the solemn circumstance when the music draws to a partial close while the piano keys accentuate how this “wasn’t [her] intention”, how she is “sorry to [her]self”. The dramatic fade in the ambient harmony unveils her fragility and conveys a final sense of regret for the audience remember but it could also signify how Demi was able to use the strength left within her to peer away from the emotional spiral, stretching out to ask for one final helping hand.

Though Demi is cognisant of her emotional agony, she is barricaded from her escape. The lyrics and her past interviews seem to imply that she is already well informed of the problems of addiction and that the solution is to abstain from further drug use yet why is a recovery so difficult? Well, it is easy for bystanders to judge and question why is she so illogical but I would assert that it is difficult to do so when your life is at turbulent times. I also postulate that everyone would face a similar dilemma, maybe not to the same extent, during each upsetting phase in their lives: the feeling you get when you know when there is nothing to feel sad about but yet we subconsciously (and maybe sometimes consciously) believe in indulging in despair.

In our state of dismay, often we are unable to consistently distinguish between the facts and our feelings towards the issue at hand, hence, unable to perform rationally as would like to have been. For those fortunate enough to overcome this stage, often times we look back at those times with a bit of shame, struggling to understand why we made wrong or misguided decisions when the alternatives seemed so ostensibly and justifiably correct. Maybe it is because we want to subject ourselves to the state of vulnerability as opposed to always having to put up this societal norm of being ‘strong and independent’, maybe we want the instant gratification of dealing with unsettling emotions by having a quick release or by throwing a tantrum, or maybe we simply do not want the homeostasis of our emotion and to resist changes that already brought us the pain. Whatever the real reason it may be, the outcome is obvious: it is difficult to eschew from the endless tendencies in our head to retreat to a assumingly comfortable position we are used to instead of bravely leaping over our pitfalls.

In Buddhism, these tendencies are recognised (which brings me slight comfort knowing that I am not the sole victim of these situations) but reminds me that there are ways to overcome it completely, implying that our happiness and unhappiness can be a choice. Now, it may sound rather insensitive to suggest that we choose our own happiness willingly but a better way to explain it would be to say that our ability to choose, especially at a tumultuous juncture, is a skill that many of us are still learning to develop. We should develop this skill because it means that we would be ready to face the challenges ahead by learning from our previous mistakes, resolve to prevent history from repeating.  At each opportunity when we are capable of coherent thoughts, we should practice the control of our emotions by being disciplined in our discourse and actions as well as by managing your access to items that give materialistic or temporal happiness, avoiding gratuitous consumption. However, when a gloomy thought crosses our minds, we should aim to identify the source of our emotions and concrete approaches to alleviate them at its core, accomplishing them as much as we can instead of quick release that will only give us short term satisfaction. Once the skills have been cultivated, we will be able to see improvements progressively in terms of our behaviour and character, as we will be able to effortlessly decide on our course of action at every unfavourable moment in our lives, unfazed by distractions and always discerning. We will be able to reap the fruits of our efforts and make sure that each grimly phase will remain as just that, a phase.

Hopefully I have not offended any of Demi’s fans or made light of mental illness in any way but this is my interpretation of the song and how I feel we can all slowly but surely make improvements to the way we think and act; habitually making an effort to be better than we were.